I posted my video in the facebook event page. After some negative remarks it was deleted.  I posted it again  and once again it was deleted.  The only person that is spoken negatively of is scary crosssdresser by way of subsequent jokes which are rather tame.  I dont understand where all the anger is coming from.  It scared a small child.  How is that not funny?
Here is a screen shot of some of the negative comments I got from the Facebook page: 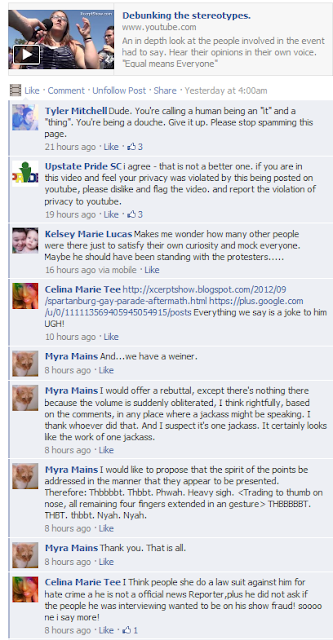 I like how people claim that the people privacy might have been violated or that this was some sort of hidden camera when I am holding a mic and moving it around.
The "hate crime" was an interesting touch.
And this is just hurtful "not a official news reporter" Well according to the federal government I am. ;)
I like how ignorant people all of a sudden are giving legal advice to people. lol

The reviews are in!
Cathy says, "This video is just STUPID!!!!!"
Robin says, "I'm walking away from this one"
Johanna, says "You make me sick." and "I can not believe how ignorant you are."
Well believe it Johanna...believe it! LOL