I went to cover the Gay Pride march in Spartanburg on Saturday.  The march was about equality for all people.  As they marched they chanted "Equal means Everyone".  I walked around and did some brief interviews with people.  There were a few religious people protesting with signs and preaching.  He kept screaming "Sodomy" which was kind of funny.
I had the video posted in the Pride event Facebook page.  It received some rather negative comments in the first 30 seconds it was posted and was eventually taken down.  I find this kind of odd. Given the nature of the march and the reaction of the people at the march to the protesters, you wouldn't think they would be so negative.  Watch the video and you will see there isn't really much negative aside from the commentary on the cross-dresser that scared the a little kid,but that was more funny than negative.  It is mostly a journey of truth about stereotypes directly from the people involved.  They were given a voice and here is what they had to say.
Also, no one I talked to owned a hybrid.  They mostly owned GM vehicles, and the event was sponsored by a Mini Cooper dealer from Greenville.  Clemson had the largest representation out of Clemson and USC. 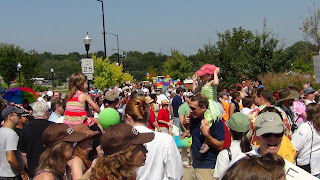