What were the views of the Garlic Festival shooter? 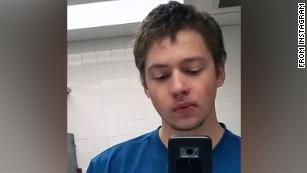 In a short period of time there have been an increasing number of shootings by young males.  They all appear to have similar views. This brief article will be to expose the views of the Garlic festival shooter. The views of the Walmart El Paso shooter are talked about as well as the Dayton shooter.  The interest isnt to praise or promote, but to know what to look for in others. The three shooters have a unifying core ideology that will surprise you.  It isnt "white supremacy".

The core unifying ideology of the three most recent shooters is radical environmentalism.  For the purposes here we will define a radical environmentalist as someone who places the well being of the environment over the well being of people.  The El Paso shooter wrote a manifesto showing exactly what he thought. He even pointed to the Australia shooting as a source for his ideology. The Garlic shooter(Legan) made a statement on Instagram about the Garlic Festival while he was scoping out the event.

Heavy.com seems to get the scoop on all of these shooters extremely quickly. They were able to pull this screen shot within 13 hours of him posting it as you can see under the post. He was said to done the shooting at almost 1800, but look at the shadows cast on the sign this was maybe taken around 1300? So sometime after 0100 the night after they were able to have his name and scrape all the relevant social media data. Props to them.

But lets look at the quote, "Why overcrowd towns and pave more open space to make room for hordes of mestizos and Silicon Valley white twats?" Sources have been trying to point to the book mentioned above it "Might is Right" and try to push the narrative to white supremacy.  This seems odd when his primary concern is the environment as opposed to which race(he mentions mestizos and whites) is overcrowding "open spaces".  The same type of language was pushed by the Australian shooter, the El Paso shooter, Bill Gates and is present in Antifa talking points(Dayton shooter was either in or affiliated with Antifa ).  Heavy has inadvertently connected the "Might is Right" book to Satanism with this quote, "According to ‘Modern Satanism: Anatomy of a Subculture,’ the book ‘Might Is Right’ is said to expand on German philosopher Friedrich Wilhelm Nietzsche’s “theories of master–slave morality and herd mentality …” The Dayton shooter was a proud satanist.
I threw Bill Gates into the mix because he is a radical environmentalist as well.  Bill Gates being a radical environmentalist is NOT a conspiracy theory it is taken out of his own mouth in TED talk he did.  He advocated for the reduction of the human population in order to reduce the amount of carbon we produced.  How he goes about that goal is debatable as to whether it is a conspiracy theory or not which I will not get into.  How do sources attribute white supremacy with his beliefs?

The "white supremacist" label is hard to follow considering he self identified as Italian and Iranian.  While both of these are Aryan groups, they are hardly the Third Reich's "master race" blonde hair and blues eyes. Legan was 2nd generation Iranian.  So this wasnt some far off connection he was trying to establish; he knew people in his family that immigrated from Iran. The Italian appears to be much more distant, but Italian heritage is celebrated heavily.

Where do these views put him on the political scale? Most outlets will try to push the book as a strictly racial book.  The book is only a supporting idea from a basic concept of protecting resources from people.  The El Paso shooter said he didnt consider mestizos as a target until he read Tarrants(Australia shooter) manifesto.  The odd thing is an Australian doesnt have much connection with mestizos and he shot up a mosque. The dominant religion of a mestizo population would be Catholicism.  The "white supremacy" angle is nothing more than a focused target for their actions.
Radical environmentalism is a far left political view. All of these shooters have been told that the world is going to end by leftists most recently by Alexandria Cortez and Robert ORourke.  So why not go shoot people and save the world?  The leftist male with no future(the world wont be around in 10 years...) is an easy target for this brainwashing and radicalization. They are told by politicians to go out and harass people.  The polarization is at a high point.  It has moved beyond a healthy debate over the correct policy to have to attack the people who dont hold our views.  Antifa has been getting more and more aggressive and calling for stabbing of politicians on the right.

Immigration, gun control, gender identity and a host of other political policies are now "fighting words" on the left.  What happened to debate? What happened to an intellectual defense of ideas instead of a move toward terroristic mindset of intimidation with physical violence and death from the left?

Fight back against the shooters and stop them. They are untrained amateurs who have done little if any objective research, and can be overtaken easily.  An attempted mosque shooting in Norway shortly after Dayton and El Paso was stopped by a 65 year old man. I have been preaching this since viewing the Autralia shooting video.  The Australia video should be an ad promoting concealed carry.  He was a complete amateur, but because everyone ran away and no one challenged him he killed over 40 people.  Tarrant dropped all of his mags in the mosque hallway, and had to return to pick up a magazine to reload each time.